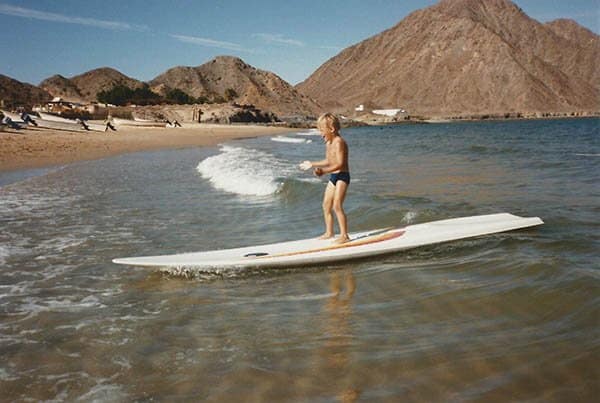 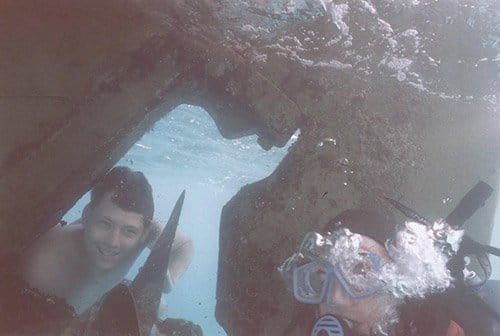 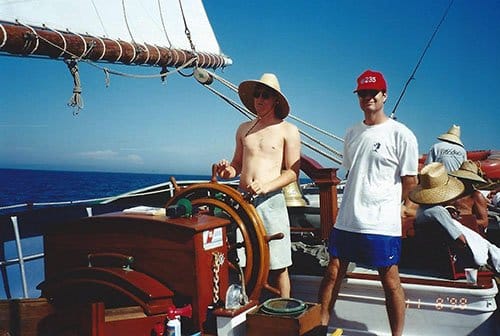 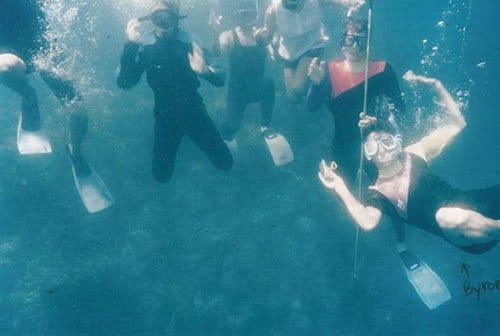 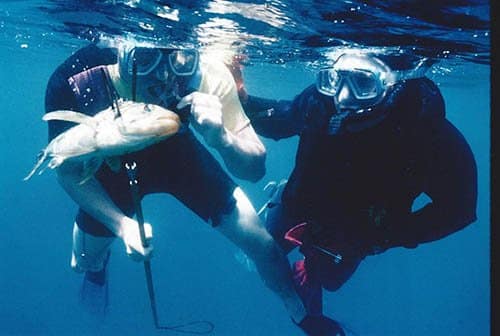 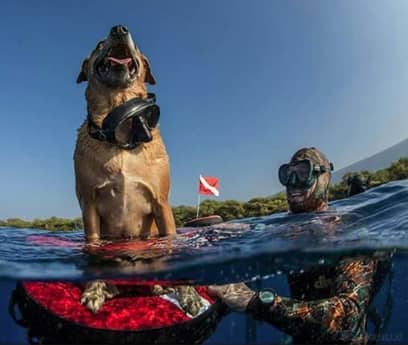 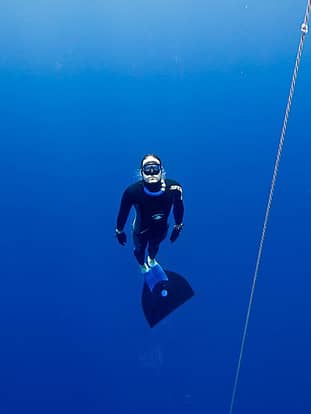 Byron oversees Kona Honu Divers, Kona Freedivers, and Kona Snorkel Trips sometimes having the privilege to get outside and teach/coach Freediving for Kona Freedivers. Byron’s love of the water keeps him going through the stresses of running a business. Aside from his time spent with the administrative side of the business Byron likes to create content for the business’ social media and youtube channels.

In a quest to set his businesses apart from the noise Byron has spent countless hours in an attempt to perfect his businesses. This has led him down a habit hole but with intensity and perseverance there is light at the end of the tunnel. Byron has learned through lots of trial and error how to successfully operate dive and snorkel businesses at the highest level.

Choosing to set his focus on marketing Byron produces video and web content for fun and for work. It’s a constant challenge creating new and innovative content for interested adventurers. There’s something a bit scary and a bit thrilling in the unknown.

Byron is also fascinated by how the world works which led him down a few rabbit holes. Economics and finance, along with human behavior and business have taken Byron into the world of systems. After traveling and observing how people differ yet are the same Byron is interested in creating a system where people can be their best selves while living happy, healthy, and productive lifestyles.

Q: What was your silliest fear as a child?

I saw the movie Jaws when I was 10. Ever since then I was even afraid to be in a swimming pool alone! It was a completely irrational fear and it’s gone now that I’ve spent enough time underwater with sharks to know better. . . . But sometimes I still watch my back

Q: Who is your role model?

I really admire Ray Dalio. He has built an amazing organization that is very effective and he is helping to explore the world’s oceans. While some people are attempting to go to other planets Ray is helping to figure out what we have here on earth. The ocean is mostly unkown and has much more space that on land. It’s a really noble effort.

I also like chef Gordon Ramsay for all of the work that he does and the business savvy he has. He just goes out there and gets it done with passion and isn’t afraid to say what he knows is true. He’s not afraid to give people a kick in the pants if they need it. I guess my appreciation for food an love of cooking make me especially endeared to him

Q: What do you want to be when you grow up?

I’ve always wanted to work in the film industry. Instead I studied biology in college. At some point I just decided that I didn’t need to go to school for it so now I make YouTube videos for fun and for my various companies.

Now that I’ve had some time to grow up a bit I think I want to found a new country.

Q: What’s is it like owning a dive company?

I love it. I get to meet some really great people from around the world as well as locals here on the island. Seeing people come back year after year, it’s like having friends or family. The business part is tough. There’s lot’s of competition in the dive industry and so it means you have to work extra hard to stand out. It has certainly pushed me to be better. A lot of people probably assume I get to dive a lot which would be true if I wasn’t so busy pushing to improve and grow the business.

Byron’s relationship with water began when he was taught to swim as a baby. Taking a few strokes underwater to gulp an occasional breath of air Byron has always preferred to be underwater rather than just in it. Playing in pools and the beach in Southern California where he grew up Byron’s affinity for the water is the real driving force behind his passion.

In Boy Scouts Byron and his fellow troop members always chose aquatic related activities over land based ones. Byron spent summers at Sea Base camp learning to pilot boats in Newport harbor. They canoed the Trinity river for a week twice. Bears would walk by the scouts heads while they slept and when a canoe got wrapped around a rock they would have to redistribute the gear to accommodate the extra cargo. For their crowning trip Byron crewed a 2 masted wooden sailing ship called the Pilgrim around the Channel Islands off the coast of California. Byron would spear dinner and swab decks. It was sheer magic. Byron became an Eagle Scout in 2000.

In high school Byron liked to extreme snorkel the beaches and coves of Laguna Beach with his best friend looking for fish to spear. As soon as Byron reached 18 he enrolled in a Scuba diving course and from there it was game on. As a college student he studied marine science and became scientific dive certified. Byron did research work writing a paper on predator prey relationships between a wrasse and sea urchin. He lived on Catalina Island giving him the opportunity to get into the water every day for work and fun. He took full opportunity of the access to one of California’s most pristine marine reserves.

After college Byron wanted nothing more than to work in the scuba diving industry. He got his first real job as the first employee at Eco Dive Center in Culver City, Los Angeles. The shop was new and Byron ran the entire retail operation. He answered phones, while filling tanks, and selling retail gear. As an instructor Byron taught on the weekends and worked in the shop during the week. While it was hard work it was possibly his favorite job ever. But the lure of academia and his education pushed him to move on to becoming a marine scientist.

Byron worked at Marine Biology Consultants in Costa Mesa, California. The work was mundane and required working from 6pm to 6am at various power plants. Byron got red-badge approved and worked at San Onofre nuclear plant which was unlike anything he had ever seen before. He performed surveys, counts, and harvested gonads from stinky dead fish. In the lab Byron performed exciting tasks such as data entry and finding various larval shrimp and worms in sand under dissecting microscopes. On his days off Byron was beginning work on Biofuel. Byron wanted to make a difference in the world and consulting work was not cutting it. Byron figured out how to collect waste vegetable oil and turn it into biofuel. His business would then deliver the refined fuel to people’s homes where they could refuel without having to visit the gas station. The business really took off. He had a waiting list of 200+ clients. Knowing he needed to expand the business infrastructure to make it really successful Byron hesitated. Academia called again.

Learning that there isn’t enough vegetable oil in the world to power everything he decided to go back to his marine bio roots. Learning about the power of algae to grow and produce oils at many times the rate of even the most productive land plants Byron decided to jump into algae-biofuel research. After making a few calls he found a Phd who had just written a paper on how to grow fuel from algae. The Phd was Mark Huntley on the Big Island of Hawaii.

When Byron asked if he was taking on graduate students he said “No, but I am looking to hire people for my new joint venture.” Byron was hooked. He ended up being the 5th employee at this new joint venture between Shell Oil and a local company eventually named Cellana. After working intensely for 3 years the project grew in size and scale with multiple labs all over the americas and over 55 employees in Kona itself. Then Shell Oil decided it no longer wanted to pursue algae fuel. At this point Byron decided it was time to do something with the business. The company needed to become profitable fast. He urged managment to pursue neutraceuticals and high value products. They understood but the academic culture was reticent to change and new next to nothing about running a company with a business mindset. Byron saw it coming and eventually the company laid off almost it’s entire workforce and eventually dissolved.

In his off time Byron took advantage of the beautiful clear waters of the Kona coast. Diving on weekends he was taking a co-worker diving at 2-step also known as honaunau. It’s a popular spot for freediving. Byron asked if he could learn to Freedive with the group and when they said yes he went and bought the stiffest pair of long blade fins he could find. After a few years of training Byron had attended a few competitions and helped run them. Eventually he took an Fii level 1 course from a friend and learned so much.

After growing microalgae Byron moved on down the street to Big Island Abalone where they grow macro algae in a large production system. Byron worked hard to optimize this system. Farming is hard work! Byron was hired by the owner of Trident Seafoods Chuck Bundrant to improve the business. After butting heads with the management and CEO he learned that doing the right thing is hard but he also learned that if he wanted something done he needed to be the boss. While he worked on the farm he would listen to podcasts and audio books. Learning a lot about business and life. His passion for learning and business soo led him to his next venture.

Byron became the owner of Kona Honu Divers in 2015. Since taking over the business he has grown it from 18 to 30 employees and aquired another boat the Honu Lele. He created the Kona Freedivers brand in 2016 to cater to the growing sport of freediving he has a special connection with. He became an FII freediving instructor in 2016. In 2018 Byron and 2 partners aquired Kona Snorkel trips (previously known as Splashers ocean adventures).

Kona Honu Divers receive the Scuba Diving Magazine reader’s choice award in 2022 for the best dive company in the Pacific while also being the highest rated and most reviewed company in all of Hawaii. Kona Snorkel Trips has grown into also becoming the top rated and most reviewed snorkel company in all of Hawaii. Kona Freedivers is Hawaii’s go to place for freediving construction also having the most 5 star reviews of any freediving business in the world.

Byron now operates his 3 businesses from home providing support and content marketing. What will the next chapter look like? It’s going to be an adventure that’s for sure!

Whale shark on the long range today!!! You never k

The beauty of diving is that you never quite know

Ohana Christmas Dive. We appreciate you so much. A